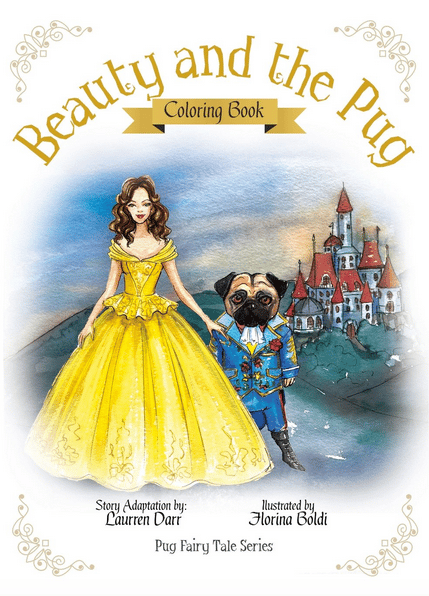 Left Paw Press is delighted to announce that there is now a coloring book available for its popular Pug Fairy Tale Series story — Beauty And The Pug Coloring Book has been released and can be purchased at online booksellers like Amazon.

Now you can color the revitalized story: What started out as an innocent business trip, ends up as a tragic situation where a father loses his daughter, Beauty, to a wrinkly pug living in a castle. Though Pug treats Beauty with adoration and provides all she would ever need, Beauty can’t get past the buggy eyes and the fact that she’s actually still a prisoner nonetheless. After a kindness from Pug that allows her to reunite with her family, Beauty realizes her love of Pug and rushes back to the castle for a story book ending. The classic fairy tale is adapted by Laurren Darr.

Following is the Amazon link for Beauty And The Pug Coloring Book:  http://a.co/7umxHf3

This series started out with Laurren and her son, Zachary. They were kidding around when he was just starting out in school. She didn’t know it at the time, but he was not being treated well in school and came home very disinterested in reading. (This was a kid that was an avid reader that could also spell at a young age.) To get him back into reading, Darr would replace the names in nursery rhymes with the names of their pugs – Inky & Sarge and Benji. (They have since crossed the rainbow bridge.) Zachary wanted these put in a book. That began Darr’s looking into publishing, starting Left Paw Press, and publishing the first book, Mother Pug Rhymes.

Laurren Darr has been a plumb-pug-crazy, animal-loving, pet fashionologist and creative since childhood. She immerses herself in expression through writing and art. She’s found that including visionary habits in life is beneficial to health while feeding the soul. Darr is on a mission to unleash the human animal bond and connection through imaginative processes highlighting pets and empowering pet fashion professionals. Her book, Lipstick On A Pug, won the Maxwell Medallion from the Dog Writers Association of America in 2015 for Children’s Book of the Year. PugDala Coloring Book also won a Maxwell in 2016.