Zachary Tinkle’s MiniCup Rookie of the Year Dream published by Left Paw Press is available worldwide at online book sellers like Amazon, where it was released as a #1 New Release in the Children’s Motor Sports category 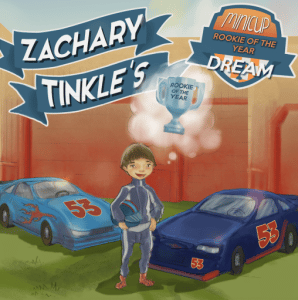 Left Paw Press is pleased to announce the release of its second book by Zachary Tinkle titled, Zachary Tinkle’s MiniCup Rookie of the Year Dream – a true-to-life depiction of his pursuit of ‘Rookie of the Year’ in the Central States Region Super Cups series. Much to the delight of fans, the book has already achieved #1 New Release status in the Children’s Motor Sports Books category on Amazon. The book is available at multiple worldwide online booksellers like Amazon. Zachary Tinkle will be making limited appearances at the Race & Performance Expo in Schaumburg, Illinois the weekend of February 25 – 26, 2017 as a part of the release of his latest children’s book.

This story picks up where Zachary Tinkle’s MiniCup Decision left off.  As soon as he shakes hands with the president of the super cup league, Zachary is asked what his goal is for the season. Without hesitation, he replies, “Rookie of the Year!”  Little did he know how much hard work and dedication it would take to achieve that goal.

Zachary Tinkle’s MiniCup Rookie of the Year Dream takes the reader through the trials and tribulations of Zachary’s first racing season as the racer with a team that hadn’t even so much as changed oil in a car before. It was an uphill battle to compete for ‘Rookie of the Year’ as an underdog in a highly competitive field.

This book shows what a person can do with drive, persistence, team work, and an attitude of pressing forward when it feels like all is lost. It inspires people of all ages to pursue their dreams no matter what life throws their way.

It has received many pre-release accolades including the following reviews.

“I loved the book! It is very interesting to me to see the “other” side of racing…..  all the things that can happen to the racer that might become a DISASTER!”— Susan Deery, Rockford Speedway

“This book has a good outlook of what it’s truly like for a racer and his or her team.  You have to ‘stick with it’ through everything to accomplish your goals. Zachary’s story encourages anyone with a goal to never give up.”   — Glen Myers, Mazon Speed Bowl & Grundy County Speedway Hall of Fame

“This is a must-read for all kids who are pursuing a dream. When all things seem to be falling apart and disaster looms, hang tough and persevere. Reading of Zachary’s start in automobile racing, facing the daunting challenges of a new adventure and conquering against a lot of odds will be an inspiration for children in all walks of life. I am waiting for the next chapter!”  — Terry McGraw, motorsports photographer and author of Shutter Speed Reads blog

“This book is for everyone that has a dream. It inspires people to not only dream the dream, but live it and experience it fully through thick and thin.”   — James L. Ambruoso ‘JimmyA’ of Finish Line Photos /Rockford Speedway Photographer / NASCAR Ambassador

“This is a short story of a young boy living out his dream of becoming a NASCAR race car driver, one goal at a time.  My favorite part of the book was how Zachary described getting into his race car, suiting up for practice, and his first time on the track. I could almost feel how he felt.  I liked the fact that he was going through very tough times at the track. In his words, disasters, and through his persistence, patience and love of the sport he was able to rise above it all, and continue toward his goals.  Zachary doesn’t take full credit for his success. He shares it with his family and friends… This book shows first hand that setting goals, sticking to them, and never giving up, is the fast track to the top.  I recommend reading Zachary Tinkle’s Mini Cup Rookie Of The Year Dream.”   — Steve Naples & Pat Gremo of Central States Region Super Cups

“As a coach for young aspiring racers, this book is something that I have been needing to give to my students for a long time!  The author, Zachary Tinkle, who is actually a young aspiring racer himself does an amazing job of showing us how to overcome the ups and downs of getting into this competitive sport.  Racing is like no other sport out there, and it has a lot to do with making sure you have the right equipment in place, but most of all the right attitude. Thank you Zachary for being a great example to all kids and to all young racers. I will recommend this book to all my students!”  – Annamarie Malfitana-Strawhand, Motorsports Marketing Coach and Driving Career Mentor, Marketing At Full Speed

Zachary Tinkle is a 14-year-old driving sensation based in Park Ridge, IL who currently races the #53 ½ size stock car minicup car (also known as super cups). He is the 2016 Rockford Speedway Wild Wednesday Super Cup Champion. Tinkle is the 2015 Illinois Super Cup State Champion for the Short Track Auto Racing Series (STARS) and 2015 Rockford Speedway National Short Track Champion for Super Cups. Rockford Speedway awarded him the “Lead, Follow, or Get Out Of My Way” award for his 2015 season. He’s been named 2015 Most Improved Driver and 2014 Rookie of the Year for Central States Region (CSR) Super Cups. Website: www.ZacharyTinkle.com.