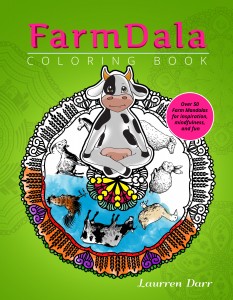 FarmDala Coloring Book can be found on Amazon in print.

About Laurren Darr
Laurren Darr has been plumb pet crazy since childhood. She immerses herself in creating through writing and art. Laurren has found that including creative habits in life is beneficial to health while feeding the soul.

In the fall of 2013, Darr combined her twenty-plus years of marketing experience and lifelong love of pet fashionology to launch the International Association of Pet Fashion Professionals. In her career, she’s won over 40 marketing and advertising awards, been named a ‘Woman to Watch’ by Alliance for Women in Media, written several best-selling books, and is a finalist for Pet Industry Woman of the Year for the second year in a row. She appears regularly in media to comment on pet fashion. Her children’s book Lipstick On A Pug won the Dog Writers Association of America Maxwell Medallion for Children’s Book of the Year for 2015. She’s a graduate of the Pet Product Design and Marketing program at FIT in NYC. Laurren’s busy Chicago-area home is filled with her husband, son, and a stylish pug Bella.